Controlling mosquitoes in their immature stages before they can emerge as flying adult mosquitoes and disperse over a wide area is the main focus of our mosquito control program. Aside from the reduction of standing water (eliminating containers and using equipment to drain surface water from natural areas) or using fish that feed on the immature mosquitoes in the water, applying insecticides to standing water that kill mosquito larvae (larviciding) and pupae (pupaciding) are employed. The immature mosquitoes are contained in the body of water in which they are developing and are more easily controllable with small amounts of insecticide. 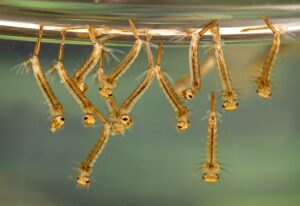 Mosquito larvae found in standing water in a container in the back yard of a residence.
Photo by James Gathany 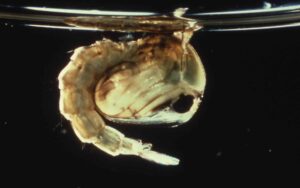 A five-route system is used in Warren County to routinely inspect known mosquito breeding areas. Four ground inspection routes along with one aerial inspection route encompass over 1300 mosquito production areas. The aerial route consists of large acreage sites that need to be treated by aircraft (with a granular material that drops into the water) to effectively control larval mosquitoes. The ground routes primarily focus on sites separated into four districts and include mosquito breeding habitat such as smaller roadside wet areas along with stormwater retention/detention ponds etc. After the introduction of West Nile Virus there has been a focus on Culex mosquitoes that are the primary mosquito species associated with the transmission of that disease. These mosquitoes can be found in some roadside stormwater catch basins that retain stagnant water after rainfall. A separate set of inspection maps for each of the ground larviciding districts are maintained to guide the inspections of these catch basins regularly. 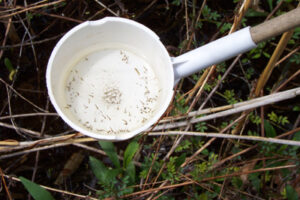 Larval mosquito populations are assessed by inspecting the sites and documenting the presence of mosquitoes first. Then control measures are implemented as needed. A variety of insecticides are available for use, if necessary, following guidelines provided by Rutgers University . An assortment of insecticides are used so that the mosquitoes do not develop resistance (where the mosquitoes are no longer killed when a product is used) which can occur when only one material is used year after year.

Some larval mosquito sites are too large to be treated by hand.  Fixed wing aerial applicators are contracted out annually to treat these large swaths of larval habitat. The plane applies granular mosquito larvicide directly to the water using onboard GPS with high levels of accuracy.