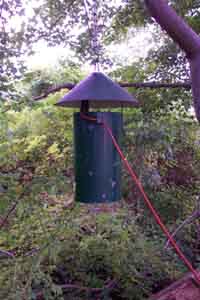 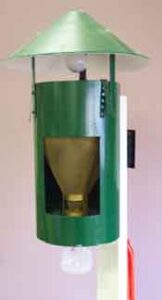 New Jersey Light Trap : This rocket shaped trap is powered by household electrical current and turns on at dusk and off at dawn by means of a photo cell inserted in the lid. The photo cell controls the 25 watt light bulb under the lid and the motor that energizes a fan. The mosquito is attracted to the light and is drawn down into the trap by the fan where it is funneled into a mason jar, which has a piece of no-pest strip on the bottom to kill the mosquitoes collected. This gives a basic picture of the types of mosquitoes in a given area. Each season the Commission places approximately 10-12 traps at sites where the homeowner or business has agreed to empty the jar daily and put the collection in specially marked boxes for weekly pick-up. Each week the mosquitoes are collected by a member of the Commission staff and are then sorted, identified and counted.

Landing Rates : Each Commission truck is equipped with a landing rate kit comprised of a special hand held aspirator, collection vials and slips to record information about the collected mosquitoes. When a mosquito lands it is carefully vacuumed into the vial where it remains until freezing. Information is recorded regarding the location, date of capture and quantity of mosquitoes landing in a five minute period. Skill is acquired to collect the mosquitoes without being bitten in the process. Once the mosquitoes are brought back to the office/lab, they are identified and this information is recorded as well.

Portable traps that are run on batteries are now used in our weekly surveillance program to supplement the mosquito collections made by the NJ Light Trap and reduce the need for employees to perform landing rates that can possibly expose them to mosquito bites and disease.

Portable Light Traps baited with Carbon Dioxide: The Portable Light Traps are hanging traps powered by a battery. They are placed out overnight and collected the following morning. A small cooler of dry-ice which produces carbon dioxide hangs along side the trap. This simulates an animals’ respiration, therefore attracting mosquitoes that are seeking a blood meal. The carbon dioxide gas produced by the dry-ice as it evaporates acts as an attractant along with the small light under the hood of the trap. The mosquitoes follow the vapor trail of carbon dioxide gas and are drawn into the trap by the fan under the light. They are kept alive in a small net until they are picked up and placed a special ultra low temperature freezer. After freezing the mosquitoes are identified, counted and recorded. Some of the mosquitoes collected are used for West Nile Virus testing.